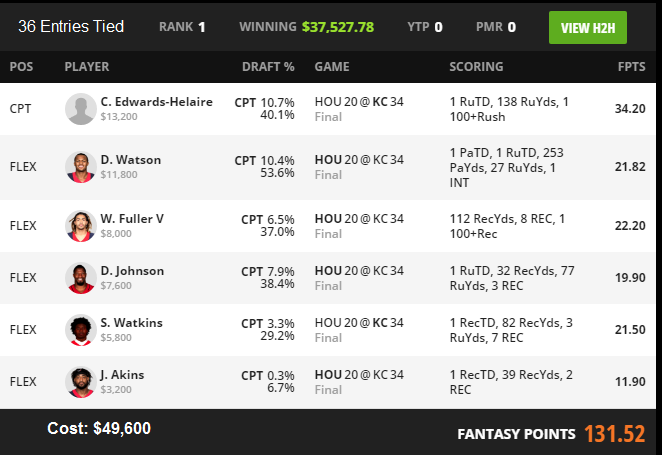 In a full slate contest it’s very rare for the top prize to get split up between multiple entries. In Showdown however, it can happen. That’s often why a lot of dfs guides key in on leaving salary on the table and looking for the cheap low owned dude to differentiate your lineups. In reality, sometimes chalk hits and more importantly, having good well-reasoned plays should be the ultimate goal. In this contest with a top prize of $1 Million, the top lineup was shared by 36 different people, who each came away with a little over $37k. Not too bad!

First, let’s go over what we got right. Gamescript? Check. Everyone expected KC to win and most everyone hit the over on the -9 line, which is exactly what played out.

*ASIDE* A little bit of betting advice on this one: use live betting to your advantage when you see a fairly sizable line like -9. The Chiefs at this number was a pretty good pick, because the Chiefs are incredible and the line was based more on how good the team was than how bad the other team was expected to be. The next time these two play though, everything else being equal, Vegas would move this line to -9.5 or -10 or more… and despite how good the Chiefs are, that’s generally not a number you want to be a part of. They’re both professional teams and a full game blowout with a garbage time TD or two could bring the Texans within 9 and you with $0 in your account as a result.

In some situations, you’ll see a big spread of -9 or more when line-makers see a bad team and an ok team and they get a little ahead of themselves. This happened a lot in 2019 with teams like Miami, who isn’t necessarily a good team, but when they lost, they often kept the game close enough that as a bettor you could be right on the winning team but wrong on the spread.  When you see any line -9 or higher, regardless of if it involves the Chiefs or anyone else, I recommend taking a moment to evaluate the betting decision and consider if a live bet makes more sense for ROI. In this game, we were unanimous in expecting the Chiefs to win, but a pregame wager at -9 on the Chiefs wasn’t as good of a bet as waiting to put money on the Chiefs immediately after the Texans scored the first TD of the game. As soon as the Texans scored, the line shifts and not only could the money you are live-bet placing on the Favorited Chiefs go further in terms of ROI, but your betting risk slides in your favor when the line moves closer to -8 or -7 or even -6 depending on the flow of the game.

The lean towards live betting in larger spreads is perfectly illustrated by the last Texans/Chiefs game on January 12, 2019. Going into the game, here was the spread: HOU: +9.5 (-105) | KC: -9.5 (-115). I know you all remember how this one went. We all expected the Chiefs to win, indicative of the Vegas spread, but the real money, the BIG money, was the live bet on the plus money Chiefs as soon as the Texans dominated the first quarter. The play was to throw down money when the Texans went up 7, and then even more down 14 and then probably a hold at 21-0, unless you’ve got balls of steel. You bet on the Chiefs before this game and you’re going to get pennies on the live-betting dollar you would have gotten on the Chiefs when they went down.

That was a really long aside, but I wanted ya’ll to take that mentality into any game where you see a large spread. Alright, back to the winning lineup.

Here’s what we said:

“I’m looking first at Edwards-Helaire $8,800 to be on full display. He’s going to score his first NFL TD in the game, in my estimation by a pass from Mahomes and then fall into a 2nd TD later in the contest.”

Boy did we almost hit this right on the nail. He had a couple of touches at the 1 in this game that he wasn’t able to capitalize on otherwise we would have had this one perfectly pegged. We were wrong about how he was going to score, but right on how well we expected him to play in this one.

Statistically the Captain spot is where we want to use 5k or higher receivers or RBs and this is exactly the price range and player situation we were looking at.

“Based on the expected gamescript, Deshaun Watson at $11,800 is going to be throwing from behind“

He was a great pivot from Mahomes and we knew he’d be throwing, or in this case running. If we liked Clyde, which we did, then from a gamescript perspective we could rationalize that his TDs might come on the ground, like a normal running back, instead of trying to force our story line through Mahomes. Either way, the more Clyde scores, the more Watson has the ball kicked back to him.

“Fuller is going to be popular, at $8,000, and most likely the new #1 target in this game, he should be very popular. Primarily due to popularity and the fact that this dude is more likely to get injured than he is to catch a TD pass, I’m going to be very underweight. He’ll be in my player pool but I doubt I’ll play him much and if those KC corners find a way to keep him in check, we’ll have huge leverage on the field.”

Alright, so here’s what we missed on this one. Cooks plays. If Cooks is out, I stand firmly behind everything we wrote here. Fuller would have gotten the best defensive coverage, almost exclusively and almost everyone else on that offense gets a slight boost, as it trickles down. As soon as we found out that Cooks is in, the inexperienced would tell you to get off of Fuller and onto Cooks, when in actuality, the situation called for the exact opposite to be true. Cooks in, should have meant more Fuller. Cooks played the decoy, as he always has when he played hurt in NE and in LA and the WR2 gets the easier coverage and the better looks. Lesson: keep an eye on questionable tags and HAVE A PLAN for when the news drops. I’ll try to do a better job of indicating a plan of action when there are important questionable tags going into a game.

“I’m a very big fan of $7,600 David Johnson. When healthy, this dude can catch out of the backfield about as well as anyone in the league and appears as healthy as he’s been in a long time. Plus, the head coach traded Hopkins for him and was criticized for that trade more than he could have possibly imagined and I’m sure he would love to get a win against KC through a solid performance from David. I think regardless of scoreline, the coach feeds the ball to the beast through a variety of dump off and short passes to get those stats flowing this season.”

We loved this guy going in. He was a smart play. Coach was going to show off his shiny new toy and Watson needed to get the ball out quick. 77 Yards, and 4 targets, could be just the beginning as he gets more comfortable with Watson. He’s someone to keep on our radar going forward. Please stay healthy.

“Watkins is incredibly priced at $5,800 and could be very popular. He’s certainly worth a look.”

We took projected ownership into account way more than we should have. Someone once said ‘just play the dudes’ and that’s what we and you should do. Forget about ownership in most instances and just go with the guy that makes sense for the situation. We knew that the KC defense is good and we knew that the Houston offense is likely to be bad without Hopkins. Kelce and Watkins are the two easiest passes to throw to past the line of scrimmage for Mahomes. Hill is 30 yards down field as soon as the ball is snapped (and he was so pricey) and honestly Mahomes could have dumped the ball to Watkins in his little 5 yard routes all night. Lesson: find what the easy play is for each offense in the particular matchup and just go with that. A lot of that.

“Ultimately I like the upside of Darren Fells between the two but where the salary meets your build, you could do an awful lot worse than taking Akins over Fells. If the dude falls into the end zone instead of Fells, you should have decent ownership leverage”

This was the one single play where we needed to zag when everyone else zigged, and we knew this. We expected the KC defense to do well and when that happens we should be targeting the easiest possible outlets, like the TE position.

We should mostly play all the dudes based on how we expect the game to play out and then look for a single guy to differentiate us exactly like Akins who had essentially the same number of receptions as the other more popular option at his position.

Good luck in your next showdown!